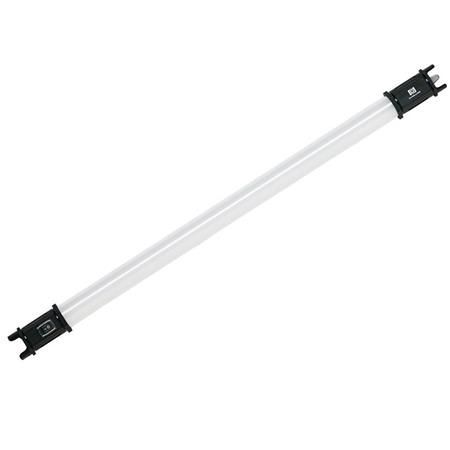 With a 1.9" diameter and T12 compatibility, the PavoTube 15C 2' RGBW LED Tube with Internal Battery from NanLite is ideal for hiding unobtrusively in small areas on a set or for shooting in vehicles such as cars, boats, or planes. The light even has octagonal ends that allow placement on the floor or other surface at a specific angle.

Flexibility is key to the PavoTube's design. The light has color temperature that's variable from 2700 to 6500K to blend in seamlessly with ambient light conditions, match other fixtures, or express creative effects. It also has an RGB mode that enables its red, green, and blue LEDs to select from 360 colors with hue and saturation control that produces myriad color combinations. Light intensity is variable as well, from 0 to 100%. While you can make adjustments locally on the fixture, you can also do it wirelessly via an optional radio remote control. Another control feature is Master/Slave Mode which allows you to designate a single light as the "Master" and other attached PavoTubes as "Slaves" that mimic adjustments made on the Master. The PavoTube also has pre-programmed special effects such as cop car, candlelight, lightning storm, an SOS signal, and two different types of continuous flicker/flash to add realism to your set.

The PavoTube has a built-in rechargeable battery that will give you a 2.2 hour run time on a full charge at 100% power. The light is ready for worldwide use via the included multi-voltage AC adapter and comes with a set of mounting clips and a padded carrying bag.

This versatile studio lighting fixture features 0-100% dimming, a maximum output of 1400 lumens, and adjustable color temperature from 2700 to 6500K, as well as a full spectrum RGB control and pre-programmed special lighting effects.

Achieve impressive results without adding plastic filters or gels. The PavoTube's easy-to-use dials and buttons enable you to dial temperature from warm to cold or hue and saturation in RGB mode.

Ideal for use in the studio or on location, PavoTube RGBW Tubes can run off either the included AC adapter or their internal lithium-ion batteries for up to 2.2 hours at full brightness when no mains power is available.

Simply connect multiple PavoTube RGBW Tubes together via a purpose-made sync cord to build and shape a powerful bank of lights with synchronized adjustments and effects.