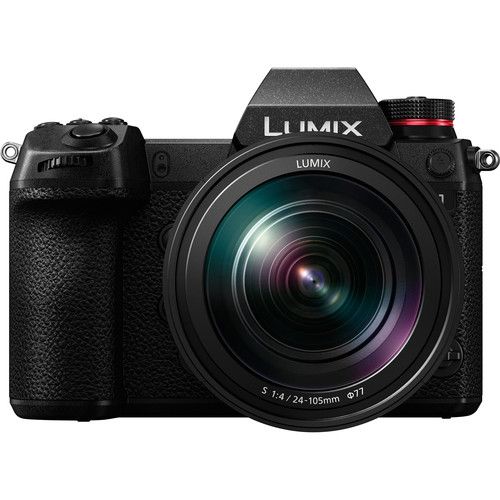 Offer valid until End of December 2020

Panasonic's high-resolution entry into the full-frame mirrorless world, the Lumix DC-S1R pairs impressive and versatile imaging capabilities with a durable physical construction. The hallmark of the S1R is its full-frame 47.3MP MOS sensor, which is paired with a Venus Engine, to produce detailed, high dynamic range stills along with video recording up to 4K60p. The sensor's design omits a traditional low-pass filter in order to achieve the greatest sharpness and on-chip aspherical micro lenses promote greater sensitivity, light condensation, and color response. Additionally, the sensor and processor work to achieve a top expanded sensitivity of ISO 51200 along with quick 9 fps continuous shooting rate. Complementing both stills and video capabilities, the image sensor also utilizes an advanced DFD contrast-detection autofocus system for quick and precise focusing and subject tracking. Additionally, sensor-shift image stabilization helps to minimize the appearance of camera shake by 5.5 stops for sharper handheld shooting.

Beyond the imaging attributes, the S1R is also distinguished by its body design, which incorporates an impressively high resolution 5.76m-dot OLED electronic viewfinder along with a 3.2" 2.1m-dot triaxial tilt touchscreen LCD. The magnesium-alloy body is weather-sealed to permit working in harsh conditions and has a top status LCD for reviewing shooting settings on the fly. XQD and SD card slots offer flexible storage capabilities and Bluetooth and Wi-Fi connectivity afford remote camera control along with wireless image transferring to tablets and smartphones.

Featuring a full-frame 47.3MP MOS sensor, along with an updated Venus Engine, the S1R's imaging capabilities have been optimized for high-resolution recording along with notable sensitivity, a wide dynamic range, and flexible recording modes. The sensor's design omits a low-pass filter in order to maintain the highest degree of sharpness and on-chip micro lenses feature an aspherical design to improve light condensation and promote greater sensitivity, reduced noise, and more accurate rendering. An anti-reflective coating also helps to reduce surface reflections and flare for accurate color response. When combined with the Venus Engine's processing power, noise levels are further suppressed throughout the sensitivity range, from ISO 100-25600, and processing capabilities further yield fast full-resolution continuous shooting speeds up to 9 fps with AF-S or 6 fps with AF-C, for more than 40 consecutive raw files.

Beyond stills shooting, the S1R is a capable video camera featuring up to UHD 4K60p recording with 4:2:0 8-bit color and unlimited recording times for the limit of the memory card. Also, high-speed recording modes for UHD 4K60, with 30 fps playback, and Full HD 180 fps, with 30 fps playback, offer 2x and 6x slower motion, respectively. Additionally, recording to an optional external recorder is possible, via the HDMI Type A port, and support for an external microphone and headphones are also available via dedicated 3.5mm jacks.

Used in conjunction with other members of the L-Mount Alliance, the L lens mount is a versatile interface with a mount diameter of 51.6mm and a flange distance of 20mm for working with a broad range of optics.

Large 3.2" 2.1m-dot LCD is a bright, clear means for live view shooting as well as playback and menu navigation. The screen features a triaxial tilting design to suit working from high and low angles, even in the vertical shooting orientation, and its touchscreen design affords intuitive settings control. Live View Boost is a dedicated viewing mode for working in low-light conditions, where the viewing sensitivity can be increased to aid in composing your image, and a Night mode also benefits working in dark conditions by lowering the screen's backlight intensity.

In addition to the rear LCD, a top status LCD can also be used for quickly reviewing shooting settings, even when the camera is powered off.

Dual memory card slots—one XQD slot and one SD slot—offer improved flexibility for image storage, allowing you to segregate raw and JPEG files to different cards, save duplicate files to both cards, or simply double your storage space with overflow recording. Additionally, the SD slot is UHS-II compatible for fast read/write speeds and the XQD slot will be compatible with the CFexpress standard after a future firmware update.

High precision shutter mechanism offers a top mechanical speed of 1/8000 sec, a flash sync speed of 1/320 sec, and has been tested for approximately 400,000 actuations.

For accelerated autofocus performance, the DFD (Depth-From-Defocus) technology quickly calculates the distance to subjects and adjusts the focusing position in as little as 0.08 seconds, with sensor and lens communication occurring at rates up to 480 fps. This contrast-detection type focus method benefits both still and video recording modes, as well as subject tracking applications, using Advanced AI Technology, where subject type, color, size, and motion vectors are used to intelligently lock-onto the moving subjects and ensure precise focus. When working with portrait subjects, face/eye detection capabilities make it easier to photograph people and prioritize focusing as specifically as on a subject's pupil. The focusing sensitivity and speed can be adjusted to further improve performance with certain subjects. It also features 225 AF areas, which provide excellent control over where the camera will focus. Additionally, supporting working in low-light conditions, a Low Light AF feature enables accurate AF performance down to -6 EV.

Benefitting manual focus operation, focus peaking is available that highlights bright edges of contrast with a colored outline for quickly recognizing your focus point, as well as Touch MF Assist for touch-to-focus operation. Other AF features include an AF Point Scope setting that temporarily magnifies the subject by 3x to 10x for confirmation of the focus position and a custom selectable AF zone for Multi AF / Custom Multi AF.

Burst: This mode will allow you to continuously record, making it ideal for instances where you need a fast frame rate in order to capture the best moment.

Burst (S/S): This mode most closely follows the video recording process, and allows you to playback your video, pause at the chosen moment, and use the shutter button to mark a chosen frame from the video and save it as a single 8 or 18MP frame.

Complementing the camera's wireless connectivity, Lumix Sync is an iOS and Android app designed to pair with the camera for smartphone or tablet-based remote shooting control and wireless image transferring.

By using sensor-shift stabilization technology, the S1R features a High Resolution mode to capture and compile eight separate exposure to create a single 187MP raw or JPEG file. Suitable for static subjects and when working on a tripod, this mode creates a more highly detailed and color accurate image than a single shot alone can produce and produces an image with a 16736 x 11168-pixel resolution.

HLG Photo mode offers increased dynamic range for improved retail in shadow and highlight regions of the image. When working in HLG Photo mode, images can be saved as an HSP file in either 8K or 4K resolution, in addition to JPEG and raw formats, for vivid playback on televisions.

I.S. Status Scope helps to recognize the type of camera shake being caused by displaying an arrow in the viewfinder or on the rear LCD.

Flicker Decrease automatically detects the frequency/flicker of artificial lighting and activates the shutter at peak brightness moments to render exposures with consistent exposure and color.

Lumix Tether enables wired, tethered shooting capabilities via USB connection between the camera and a computer. Aside from offering a larger live view preview, this application also permits remotely triggering the shutter, use of 6K and 4K Photo modes, and video recording start/stop.

More Information
In the Box
Reviews
Write Your Own Review
Only registered users can write reviews. Please Sign in or create an account
Related Products
Check items to add to the cart or